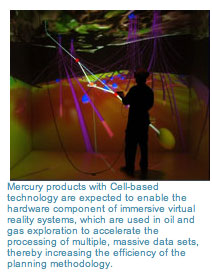 “The PowerPC inside the Cell is in roughly the same class performance as today’s IBM PowerPC 970 processors. It is the addition of the eight SPU cores that give Cell its performance boost.” Randy Dean, Vice President at Mercury Computer Systems told MobileMag earlier this afternoon.

Thanks to the Cell technology, Mercury will be able to offer their customers boosted computer performance, particularly in demanding applications such as radar, sonar, MRI, CT, digital X-ray, and others to a new level of sophistication and performance. If my hunches are correct, this means enhanced security for the government.

Your run of the mill Intel processor can perform at about 6-7 billion floating-point operations per second (GFLOPS), while the new Cell microprocessor, well let’s just say it will blow the top off Canada’s Michael Smith Genome Sciences Centre. They have a cluster of 70 dual Pentium III 1.4 GHz machines capable of peaking 196 GFLOPS, this still brings them a bit shy of IBMs Cell microprocessors 204.8 GFLOPS peak performance from the single chip with 8 SPUs. And it can still go far beyond that, should we start up SETI and find out what’s really out there?

Mercury is shipping scalable subsystems with up to 1000 processors, they have no direct plans to sell the Cell microprocessor, but they do offer several add-in cards for desktop PCs, so who really knows.

Sony and Toshiba however are currently working to bring exciting new consumer electronics devices (PS3) that utilize Cell and can decode the most amazing video and perform any task that you could imagine. I bet Steve Jobs is kicking himself in the arse right now, literally.