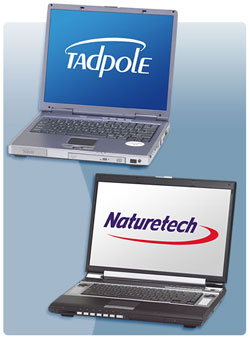 Sun Microsystems this week announced their first notebook computer, Sun’s move to the mobile marketplace will give engineers that needed power to perform technical operations while on the road.

The Ultra 3 mobile workstation starts at US $3,400, the entry-level model sports a 64-bit 550 MHz UltraSPARC IIi processor, the cream of the crop uses the 1.28 GHz UltraSPARC IIIi processor. Memory is available up to 2GB ECC 266Mhz DDR-SDRAM, 15 or 17-inch LCD displays, and even a 73 GB Ultra SCSI internal disk storage on the high-end version. Of course the expected networking essentials are added; 802.11b, 10/100/1000 ethernet, it even has RS232C serial port via RJ12 connector and two PS/2 ports via 6 pin mini DIN but no Bluetooth.

It’s a powerhouse of a notebook computer, running on the Solaris 10 Operating Environment. John Fowler, executive vice president of network systems says these are designed for the traditional Sparc customer that wants to extend into the mobile environment, at these prices and performance, we won’t argue with him.