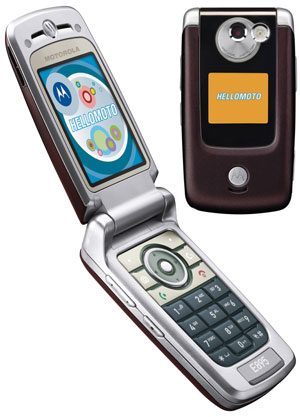 Today at the JavaOne Conference in San Francisco, California, Motorola released the Linux-based E895 EDGE mobile phone. The E895 has a 1.3 megapixel camera with pan and zoom capabilities, Motorola is claiming that it will take great photos even in low light; this is a known failing point with almost all mobile phone cameras.

The Motorola E895 runs on a Java and Linux (JUiX) combination OS with tri-band GSM connectivity, it also offers capture, playback and streaming video. The LCD display screen is said to be the most vivid and largest high-resolution colour screens for mobile phones to hit the market, Motorola did not release specifications so we have to take their word for it.

Bluetooth functionality has been expanded in the E895, printing of your captured photos is possible via your Bluetooth wireless printer, also peer-to-peer gaming and support for a Bluetooth stereo headset. Additional memory and multimedia files can be accessed on the expandable TransFlash slot, Motorola expects the E895 to ship Q4 of this year.