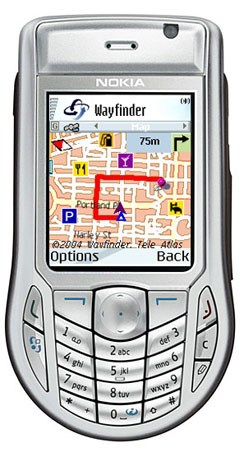 Nokia and Wayfinder Systems have begun offering a bundled version of the Nokia 6630 mobile phone with the Nokia Wireless GPS Module and Wayfinder Navigator software. The navigation pack covers all of Western Europe, Wayfinder does have map packs for North America, but it does not look like it will be bundled in this package.

Wayfinder Navigator connects to the Nokia Wireless GPS Module over Bluetooth, this gives users their exact position on a digital map via the phone interface, from there the easiest route to the destination can be chosen.

This is not the first mobile phone to support Wayfinder Navigator, many Nokia Series 60 devices are supported, and a few Motorola and Panasonic models. But this is the first bundled package to be sold with a Nokia handset; essentially it’s Nokia’s seal of approval. It wouldn’t surprise me if Nokia acquires Wayfinder Systems to integrate a navigation system into all new high-end feature phones.

Nokia also reported that a bundled version will be available with the Nokia 6670, and versions for other markets should be available later this year (North America?).