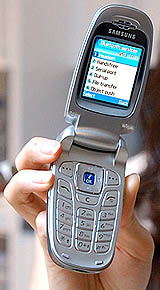 Samsung has unveiled a new phone with Bluetooth voice recognition, the Samsung SGH-E620. The E620’s voice recognition function lets you answer calls, dial, and even hang-up calls via the Bluetooth headset. The phone will be compatible with 5 different languages including English, French, Spanish, German and Italian.

So far the phone is only for the European market.