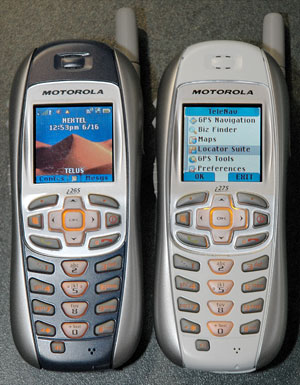 Nextel has exclusive distribution rights to both the Motorola i265 and Motorola i275 mobile handsets. These phones are very similar in design and features and have a typical Nextel design considering their hefty, curvy form factor. They both function with Direct Connect push-to-talk on the Nextel 800MHz IDEN network.

Being candybar phones, the i265 and i275 can be ugly to some and the only thing that matters for others. It’s really just a personal preference, do you like to flip or stick.

The i275 is 1mm more thick than the i265, it measures 122 x 50 x 26 mm and both have good solid feeling, weighing in at 130 grams. The keypad is attractive at first look, with a runway of lights leading up to the display. But once they light up, it is easy see the numbers are simply painted on. The keys feel slightly cheap because of the plastic and the numbers may be prone to fading or rubbing off in due time; rubber is always the best in my opinion.

The LCD is a 65000K 1.5-inch colour screen, the display is pixilated and not as sharp as one would hope a colour display would be. The brightness is great indoors, but in direct sunlight is almost illegible. It’s lack of resolution is most noticeable when viewing an image or desktop background, but text and numbers are much sharper but still unclear. The extendable antenna is very durable compared to many others, it will take the daily abuse of bends and bumps.

From a feature standpoint, the i265 and i275 are packed, especially for the business user. The capability to store 600 contacts, Group Connect Push-To-Talk, and T9 predictive text-input will keep you easily in touch with your contacts, whether it be by voice or text.

The built-in speakerphone is very loud and clear sounding, the microphone is also excellent in terms of sensitivity. There are many ringers to choose from, the volume level is quite loud and would surely not be missed if turned all the way up. 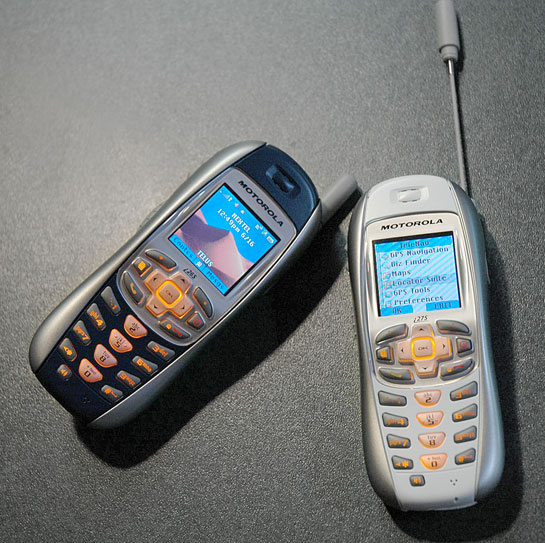 GPS service with turn-by-turn navigation is possible with either of the two handsets if subscribed to the TeleNav service. TeleNav can get pricey; the service costs $9.99 per month without data for unlimited trips or a 10 trip/data package per month for $9.99; this is probably the best deal for most light travelers. Smaller packages of 5, 10 and 20 trips can also be purchased, but they only save you a couple bucks and don’t include data fees.

I had difficulty keeping a GPS signal locked, if it isn’t sitting on the dashboard in clear view of the sky you will lose your connection. I think the main problem I had was the lack of a window suction mount, it should perform much better if it has a stable position in clear view of the satellites.

I also noticed delays in the turn-by-turn voice prompts when traveling on small streets, the system choked and did not update fast enough, by the time it updated the location I was long past that turn; It sent me in circles for a good 5 minutes, but this only happened once, and I was going a bit fast. On the highway and when it has enough time to update its location, it is as flawless as a GPS could get.

The GPS TeleNav Java-application is loaded with information on top of its obvious navigation features; Biz Finder, Maps, Locator Suite, Compass and Waypoints are all available.

Nextel has some of the most advanced GPS services for mobile phone users out there. They offer everything from entry-level navigation for consumers vacationing, to corporate GPS location deployment with secured location data. They have also just recently released truck-specific GPS navigation with real-time view of truck and shipment locations and spoken turn-by-turn, street-level, truck-specific routing information, such as avoiding roads with height restrictions.

On many occasions I had experienced audio-damaging frame errors in areas with low signal levels, this choppiness in sound was most noticeable while on the road and traveling at high speeds above 75 mph, er I mean 65.

Since these phones run on the J2ME (Java 2 Platform, Micro Edition), it can be very slow starting up (20 seconds to boot) and also slow starting applications. The digital camera (only in the i275) is useless, if you are looking for a phone with a camera you are better off going for the i860. Images are captured at 640 x 480 (0.3 megapixels) and have terrible colour rendition, low-light issues and are just plain blurred.

Bang for your buck

From a price point, the Motorola i265 and i275 handsets are very affordable, especially considering their features and options available on them; the i265 costs only $49.99 and the i275 is $99.99. Of course you will be in a 2-year agreement with these prices, and they don’t include additional features like GPS TeleNav or 1KTV on demand television.