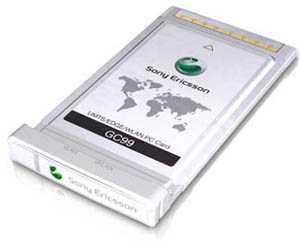 Sony Ericsson has announced their new 3G/Wi-Fi wireless PC card which blends both Wi-Fi and 3G connectivity into the one card. The GC99 works with both 80211g and 802.11a access points on the Wi-Fi end. On the 3G end it has the capability to connect to regular GSM (quad-band) dial up, and GPRS packet-switched communications.

Ericsson is claiming that the card is a ‘first’ in the joint 3G/Wi-Fi category but as The Register points out, there are others out there on the market that feature both 3G and Wide Area Lan on the same card.

The Sony Ericsson GC99 should start shipping in the fourth quarter of 2005 in Asia-Pacific, China, and EMEA countries, including the UK. No word on pricing.