Samsung Electronics has released the SCH-S380 MP3 slider phone with a mere 306MB of useable music storage. I bet everyone was expecting at least a 4GB MP3 phone, especially from Samsung.

They unveiled the SGH-i300, a 3GB multimedia smartphone that can play MP3, WMA, AAC, AAC+, and OGG formats and record video messaging to MPEG4, so it is slightly confusing why they would take a few steps back and not make the SCH-S380 a 3GB phone or even add Wi-Fi to it.

A few unique features that the SCH-S380 does have is dual surround sound speakers, they give the phone a live acoustical effect and it is also the world’s first 128-polyphony handset. Samsung also included a jog-wheel style controller, it will let the user quickly “spin” around the menu interface, accessing music, photos and any other data stored on board.

A composing feature allows users to create their own music. The internal memory is 50MB with 256MB of expandable TransFlash. It also sports a 1.3 megapixel camera, measures 91.1 x 37 x 24.1 mm and weighs 88g, small enough to wear around your neck.

The phone is expected to sell for about US $400, no release date was announced. 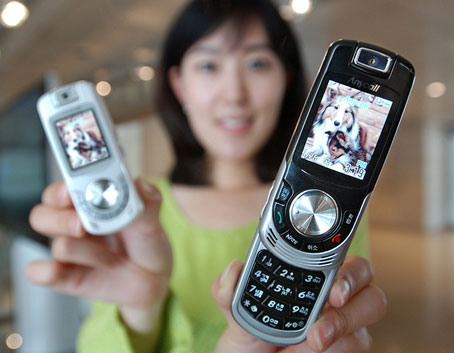