Samsung has announced their new prosumer digital camera based on the look and feel of a Digital SLR. The Samsung Pro 815 was first spotted back in April at the photo fair in Beijing, China.

The Pro 815 will feature an 8 megapixel sensor, 15x zoom (28-420mm equiv.), and a huge LCD screen at 3.5-inches. To go with that huge LCD screen the camera will also need a huge battery, and they filled those shoes with a large capacity lithium-ion battery (1900mAh, 7.4V). The lens, which resembles a SLR lens, is a Schneider-Kreuznach lens with 15x zoom capabilities. Another interesting feature is the second LCD on the top of the camera for waist/ground level shooting. Shooting modes will include 2.5 fps burst mode, up to ISO 800, and the ability to record movies at 640×480 resolution.

The Samsung Pro 815 camera should begin shipping in August and will set you back around $1,100 US. 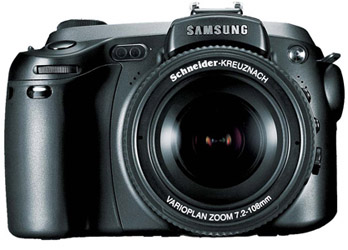