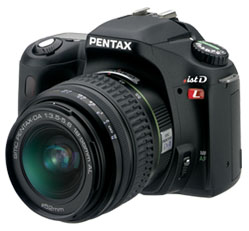 Pentax has announced a downgraded version of their Digital Single Lens Reflex camera aimed at users who want to break into the DSLR era. The new model name will be Pentax *ist DL, and I’m guessing that the L stands for “light” as the features are just slightly hindered compared to the DS version of the camera. Pentax seems to be following suit with the likes of Nikon who announced a downgraded cheaper model of the D70 with the name D50.

The downgrades aren’t that huge considering the camera still features the same 6.1 mega pixel sensor but areas such as shooting buffer and auto focus zones are kind of hindering. The list of changes include:

No word yet on pricing or availability, but stay tuned.