MobiNote has released their second generation portable media player today, the MobiNote DP7010-SP. The predecessor was rebranded by TwinMOS being dubbed the X-Frame II, unfortunately MobiNote decided against keeping the original soft-white finish which very much resembled a PMP which Apple may have released, if they had it in them.

The new DP7010-SP is being shown at Computex 2005, it boosts the storage capacity to 40GB, adds DRM support and an exclusive device ID for DivX Video-on-Demand (VOD). It seams as MobiNote is making their new PMP much more attractive to mainstream OEMs by creating additional ways of generating revenue from media.

With DivX VOD users can legally purchase and download movies online for viewing on their DP7010-SP. When a video file is played back, the device will check the registration code, only if that code matches the code of the video file will the user be able to playback the content. This is great for the online retailers, but sucks for your friends. If you try to send them a video it will not play on their system, similar to the hassles users experience with DRM encoded audio. 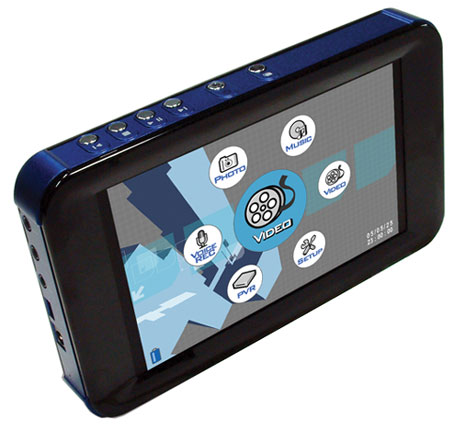 Some more specs on the locked up DP7010-SP, it features a 7-inch LCD display with high-quality LTPS (Low Temperature Poly Silicon) screen. MPEG-4 video is supported with 16:9 screen format, it also has built-in stereo speakers, MP3 player, photo viewer, voice recorder, and digital video recorder. It also has a resolution of 400%, which MobiNote claims gives the DP7010-SP a resolution comparable to a cinema screen.

MobiNote has tailored the DP7010-SP to give users the freedom to legally convert and record VCD, DVD or DV movies into MPEG-4 files and store them in the PMP for later use. Whether files created from un-protected systems can be used or these self-created media files can be shared, is not known. This PMP and others are expected to be out by the second half of this year.