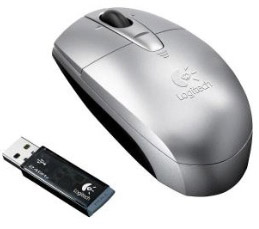 The battery life is definitely a huge seller for the V200 the mouse, Logitech claims that you won’t need to change your batteries for over a year! As for the Mini, you should see around 4 months of battery life on one AA.

Both the V200 and the Mini feature a battery indicator light and miniature USB wireless receiver unique to your mouse which snaps into the base of the unit when not in use and shuts it down to save battery power. In addition, both mice feature a Tilt Wheel Plus Zoom which allows you to scroll left, right, up and down, and zoom in and out of images, Web pages and open documents. The V200 will have a wireless range of 30 feet, the Mini around 6 feet.

The V200 will be available this month for a price of $40 US and will initially ship in onyx and silver colors. The Mini Optical Mouse will retail for a cheaper $30 and will ship early in July with either an aquamarine or silver paint job.