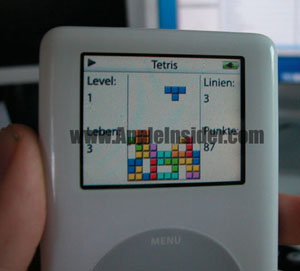 Apple Insider has a juicy rumor about Apple’s new iPod photo software update. They are claming that the new version of the iPod Photo Software 1.2 will contain a version of the ever so popular Tetris.

The rumor digs further claiming that the click-wheel will be used to move the blocks horizontally and the click button will perform the block rotation. Also included will be new transition effects between photo slideshows including mosaic, cube, and fade effects.

No word on when the update will hit, development seems to be done, so I’d expect it soon!

Thanks to Apple Insider for the photo.