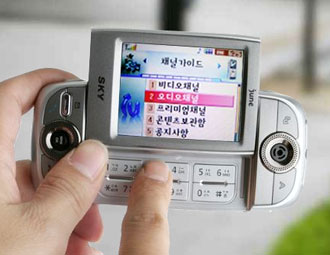 Texas Instruments and Samsung have announced plans to deliver several digital TV mobile phones to the Korean market. The phones will be capable of receiving Digital Multimedia Broadcasting (DMB) signals from satellites and other terrestrial network transmitters located near the end-user.

TI’s OMAP-DM multimedia processor was selected by Samsung Electronics for their handsets, it will deliver crisp and clear video to consumer mobile TV handsets. Satellite signals received will allow users to tune into high-quality MPEG2 AAC audio or MPEG4 video and choose between dedicated sports, comedy, news, games, music and movies anywhere within the networks range.

In-vehicle DMB systems are also slated for release, they will deliver high-definition video and audio to drivers while on the road.