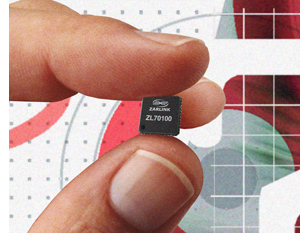 A Toronto-based chip manufacturer called Zarlink Semiconductor, has released a chip that will allow doctors to remotely monitor a patients condition. This could be the first type of in-body communication system ever released, it will allow a doctor to monitor a pacemaker or even control a diabetic’s insulin dosage from miles away.

Back in March of this year, TeliaSonera announced BodyKom, a wireless service that would monitor patients with heart disease, blood pressure, diabetes, asthma, and other diseases that would not normally be monitored around the clock.

Zarlink’s chip is much different then the BodyKom service. The Zarlink chip would be implanted into a patient, it would have the capability to wirelessly link implanted devices with base stations and ultimately with a doctor or hospital. Zarlink is claiming that their chip will consume 20 percent of the power that rival products consume, when it does not transmit information it switches into power-save mode and sleeps.

“Some of the big companies are even (developing) brain stimulators for things like Parkinson’s disease and epilepsy.” said Steve Swift, general manager of Zarlink’s ultra low-power communications unit.

The chip is capable of operating within a two meter range, this creates many more possibilities for Zarlink users. Doctors could adjust a pacemaker wirelessly using a two-way high-speed wireless link, without the need for surgery. The chip could also notify a nearby cellphone of a heartattack and automatically dial 911.