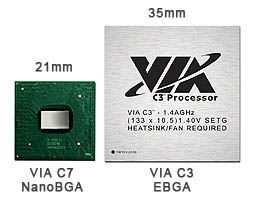 Via has announced their new notebook processor at Computex trade show in Taipei this week aimed at delivering light notebooks for a sub $800 price. The chip, the C7 processor, will be competing against the likes of Intel and AMD for market share.

The new chips will debut at 1.5GHz and 1.7GHz with a plan of releasing a 2GHz model later. Initial bus speeds will be 400MHz and 533MHz and later hit 800MHz with 256k cache to cut processor development costs. The former chip, the C3, was plagued with slow performance lagging behind the major competitor’s processors and was usually used in laptops as large as boats.

The chip will also feature many security features such as an NX bit which blocks buffer overflow attacks. Also, Via has included stepping down technology to save battery power when the load is light, allowing you to save power. For example at 1GHz the chip consumes 3 watts, at 2GHz the chip will take 20 watts.

The first batch of laptops will be unveiled this week at Computex.