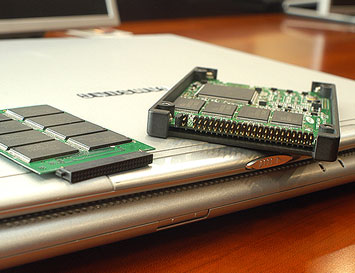 The SSD’s performance exceeds that of harddrives comparible in size by around 150 percent, disk read speeds are rated at 57 (MBps)MegaBytes per second and writes at 32MBps.

The 1.8-inch type SSD will be available in August, 2005 for sub-notebook and tablet PCs. 2.5-inch type SSDs that carry 16 NAND Flash devices of 4Gbit or 8Gbit density for 8GBytes and16GByte of storage respectively will follow later.