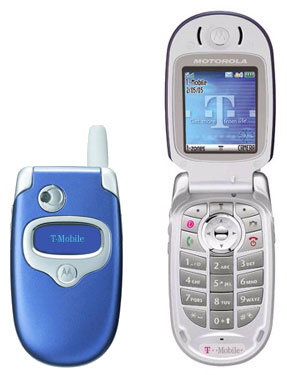 The first EDGE mobile phone from T-Mobile was introduced this week, mainly for users requiring faster data over for their wireless handsets, the Motorola V330 will give you just that.

EDGE will give you high-speed data transfers at a maximum of 384 Kbps, compared to much less with current GPRS standards in place.

The V330 is has a clamshell design, features include video clips, picture messaging, speaker phone and Bluetooth device support. AOL Instant Messenger will keep you in touch with buddies anywhere in the world and with GSM Quad band 850, 900, 1800, 1900 MHz support you can even call them from over 179 countries.

It measures 3.5 x 1.9 x 1.0 inches and weighs 4.3 ounces. Caller ID is supported on the external LCD display, and of course an internal 65K colour LCD is for all your other needs. T-Mobile is now selling the Motorola V330 for $199, they also offer one instant rebate and another mail-in rebate which brings the price down to $99. Now all we need is for them to get the EDGE network running.