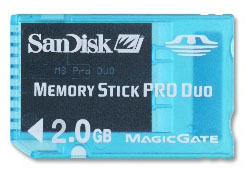 SanDisk continued to say that 20% of PSP owners have purchased an extra memory card, with expectations that that number will increase to 50%. With over 600,000 PSP’s in the first week of release, that’s a TON of cards. I wonder how much Sony manages to take off the top of each sale considering that the format is proprietary to Sony products.