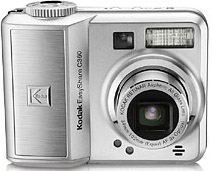 Kodak has expanded their line of EasyShare cameras today with the introduction of three new models the C360, C330, and C310. Each of the cameras have the option of being packaged with their Printer Dock Series 3 for easy printing (for a low additional cost of $100), or on its own.

The Kodak EasyShare C360 will start off the lineup with a 5 megapixel sensor, 2-inch LCD screen, and a 3x optical zoom lens. The camera will have 32 MB of useless internal memory, and a SD slot so you can actually get some useful storage space. The camera itself will cost you $279, or $379 packaged with the printer. Expect to see it hit shelves in August.

Next up we have the C330 with a 4 megapixel sensor with a 3x optical zoom. It features a smaller LCD screen than the 360 at 1.5-inches, 16MB internal memory, and a slower ‘click to capture time’ of 0.68 seconds. The camera itself will retail for $179 or $279 with the printer. Expect to see this one in July.

Last but not least we have the C310 which features the same sensor as the C330 at 4 megapixels. The lens itself is a fixed focal lens at 35mm with an aperture of f4.5, which utilizes digital zoom at 4x. The LCD screen on this one will e 1.6-inch and has a capture time of 0.2 seconds. The camera will retail for $139 or $239 with the printer.