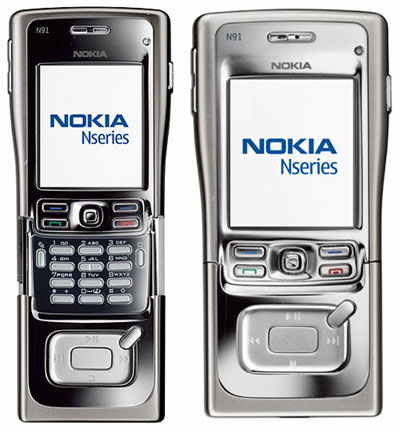 Nokia has unveiled their next generation multimedia handsets branded under the Nseries name. The release of these handsets mark a big step in mobile phone evolution, they begin to take on more forms and functions that we have been anticipating to see for quite some time now. Just the simple announcement of these phones will definitely kick a few competitors in the butt and get their wheels in motion.

The Nokia Nseries handsets run on the Series 60 platform, the features designed are to market the device as a single solution for all your digital needs, from snapping pictures to WLAN communications.

This is considered to be the world’s smallest Series 60 3G WCDMA device on the market, it sports a 2 megapixel camera with an “elegant Nokia Nseries design” targeted to mobile photographers. The slide and shoot style lets users take photos or video fast and easy, once the camera slide reveals it automatically activates. It is capable of 20x digital zoom with several image quality environments, including Scenery, Portrait, Night, and Sports modes. The shutter key is located on the side of the phone so you can capture images like a normal camera.

Images and video clips can be transferred easily with the Nokia XpressTransfer storage solution over USB cable, wirelessly over Bluetooth. This allows for files to be automatically transferred to your PC. Photo albums created on the phone will also be saved on your PC, it ships with Adobe Photoshop Album Starter Edition software for you to organize and edit photos and video clips once transferred. 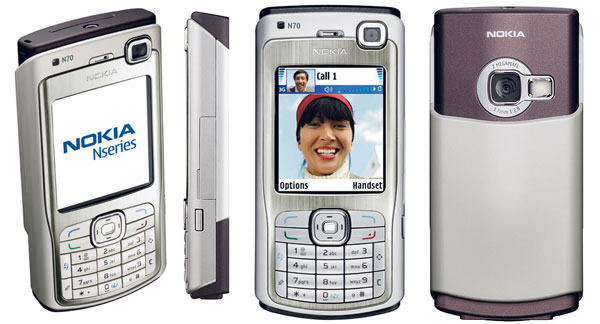 Nokia’s N90 is a step up for mobile photography compared to the N70. It can capture images at 2 megapixels but can record video at VHS resolution (MP4 format at 352 x 416 pixels ) and is equipped with Car Zeiss optics for high quality image resolution. The twist-and-shoot design makes it quick for users to enable their camera mode, by pressing the cleverly placed capture button halfway, the N90 focuses on the subject. Yes, I said focus. Once you press the key all the way, the camera captures the image. It even has a macro mode feature which Nokia says “captures images with amazing clarity”.

Photos and video clips taken with the Nokia N90 can conveniently be stored on the phone’s internal 31 MB memory or the 64 MB in-box RS-MMC. Users can also easily store captured content at full resolution using the Nokia PC Suite Image Store, which, when connected, automatically saves images and video clips to the PC.

Images and video clips can be saved on the internal 31MB of memory or the 64MB RS-MMC card that ships with the phone. Post processing videos can be done with the included Adobe Mobile Video Editor Software. When connected with Nokia PC Suite Image Store, pictures and video can be saved directly to the PC.

Adding a 4 GB hard drive with 12.5 hours playback time to any phone is bound to turn heads, adding it to the N91 makes it just plain awesome. Sure it’s a 3G WCDMA handset, but also capable of WLAN connectivity, Bluetooth and USB 2.0. So once we get Mobile Skype for Series 60, say bye-bye to your hefty per-minute communication fees, just connect to a hotspot and make your call.

The N91 has a 3 .5mm stereo headset jack making it a true portable phone MP3 player that will kick the iPod Mini in the crotch. Music formats supported are MP3, M4A, AAC and WMA, you can drag and drop music to the phone over USB 2.0 for fast transfers, even manage playlists. I’m sure the RIAA will get heart-burn over this, but Nokia is allowing users to share music files over multimedia message, email or Bluetooth.