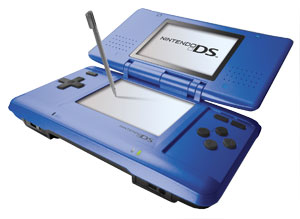 To celebrate their near 2 million DS systems sold in North America, Nintendo has released an Electric Blue colour Dual Screen version to join their silver and black model line-up.

The Electric Blue DS will be out in June this year, around the same time that Kirby: Canvas Curse will be released, this game utilizes Nintendo’s touch-screen technology by moving the character along the path the user draws. Near the end of June Nintendo also plans to release Meteos; a meteor maneuvering puzzle game.