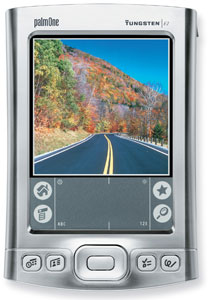 palmOne has just unveiled their Tungsten E2 handheld with added Bluetooth support, flash memory, more powerful battery and brighter colour screen; a slight upgrade from its predecessor the Tungsten E. palmOne kept the price very reasonable at $249 USD, you can’t ask for much more but times are changing and if palmOne simply keeps upgrading their current designs with “more memory” and “brighter color screens” they will lose consumer interest.

At this point they are basically milking the Palm OS cow for what ever it has left. Companies have lost interest in Palm software, Linux and Windows Mobile systems have managed to evolve effectively with corporate and consumer user needs. Sure the Tungsten E sold 2.0 million units worldwide since its release in September 2003, but we have not yet seen any new products from palmSource in quite some time. Their latest major move was the purchase of China MobileSoft Limited (CMS), a mobile phone software company with a large focus on Linux-based devices. Even palmSource knows Palm’s time is up. Another good indicator of Palms disintegration is the use of Intel’s 200MHz XScale processor, the previous E used a 126MHz Texas Instruments OMAP 311 ARM Processor, with the new XScale chip the E2 could theoretically run on the Pocket PC platform (any hackers out there?).

The E2 is a great improvement for users looking for a few extra features to add to their Palm lifestyle. With the added Bluetooth module, the E2 will allow you to synchronize with your Bluetooth-enabled desktop wirelessly. You may even send emails and access the web with a Bluetooth-enabled mobile phone.

No memory was added, either add 256MB+ or don’t even bother releasing a new model. The E2 still only has 32MB of non-volatile flash memory with 26MB of actual storage space. Thank goodness for the expandable SD/MMC/SDIO slot, or the added MP3 player would be almost useless with your 26MB of free internal space.

Sorry to be hard on you Palm people, but times are changing and I hope you do too.