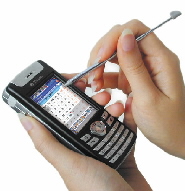 Oswin Technology out of Singapore has created a smartphone that is capable of running five different operating systems. The Zircon Axia A108 is the creation, it will sell for $899 and can run on Windows CE, Pocket PC, Palm OS 6, Linux and MXI.

The A108 is not compatible with 3G networks and has no Bluetooth connectivity, two important features that most smartphones already utilize. Oswin is new to the smartphone market, they will have a tough time bringing a device to the market that lacks major functionality.