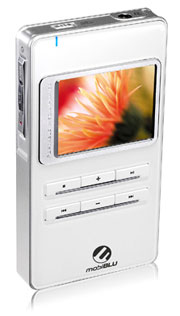 The Korean division of MobiBlu this week began selling their DVH-100 portable video player with a 2.2-inch LCD display capable of playing MPEG1, MPEG2, MPEG4, AVI, XviD and Divx 3.x to 5.x video. It sells right now in Korea for about $390 to $490 USD, hopefully by the time it gets here near the end of April or early May it will be less. The DHH-100 I reviewed back in December did not have an FM Tuner, but the Korean version did, let’s hope MobiBlu America does not strip this feature on the DVH-100.

The device measures 118 x 65 x 20 mm and has USB2.0 and USB1.1 host support allowing you to connect to almost any device, even browse files on your PDA. Audio formats supported are MPEG 1,2,2.5 and MP3. It will record audio at 128kbps and video from TV at 30fps, 640 x 480 resolution in MPEG-4 or DivX. The photo viewer only supports JPG and BMP files, but can handle 6 megapixel images and load them in about 2 seconds. 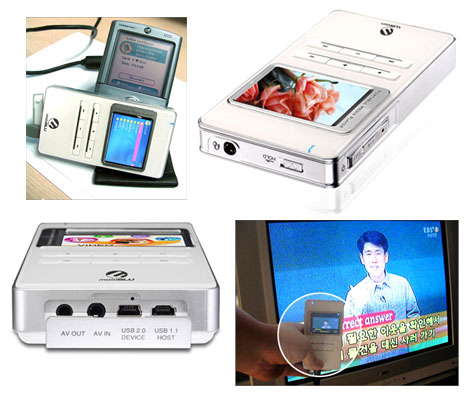