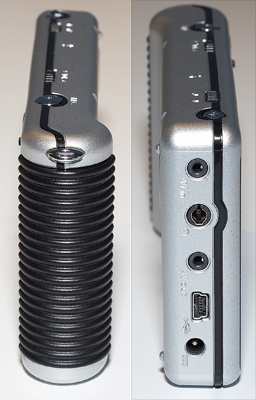 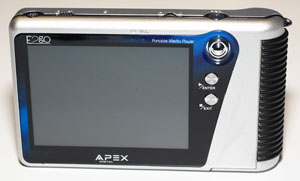 Portable video players are the latest gadgets that have been turning heads ever since Archos introduced their ever popular handheld PVP with a built-in hard drive. Apex sent us their latest player which goes by the name of the E2go MP-2000; a low price, slick looking, 20GB, highly portable video/audio/picture player and video recorder. After poking around the ever-so-informative internet we stumbled upon the MSI MegaView 561 PVP. The 561 was MSI’s PVP until they passed it off to Apex, they have now moved on and are pushing their new MSI MegaView 566 PVP, it adds a high-resolution LCD, we will talk more about this later, an SD/MMC card slot, and an optional FM radio.

The initial impression of the MP-2000 was great, the size and the weight of the device easily sell you over. Your hands will feel at home on the device’s hand grip which perfectly places your thumb over the controls (thumb joystick, play/enter, and stop/exit). On the top of the device lie the power button, function lock, microphone, volume toggle, and record button. On the left hand side of the device we have all the input and output ports; USB 2.0, power, AV out, headphone jack, and AV in. On the bottom we

have a tripod screw mount, which really surprised us, well done Apex, er MSI. On the back of the device is a built-in speaker that sounds like a tin can.

The screen is quite large at 3.5” but the quality of the LCD is sub-par to enjoyable movie viewing, the pixilation looks somewhat like a grid to the naked eye, even like an old game boy display. When playing video we noticed a bit of a blur, not horrible, but thought it should be pointed out. Contrast and brightness of the screen was average, we could see it fine in both outdoors and indoors but it doesn’t compare to other models in this price range.

The battery life on the device should last for around 8 hours for MP3 playing and probably around 3 hours for video. We apologize but we couldn’t conduct any battery tests on this device due to the lack of a charger supplied by Apex.

Now on to the specifications

The MP-2000 comes with the following:

The MP-2000 has built in support for multiple video codecs such as DivX, WMV and MPEG-4, but we were plagued with troubles figuring out what combos of sound and video codec’s work with the device. I kept constantly seeing the dreaded “Unsupported format” message. Apex didn’t send a manual with the device so we are not sure if they list the different codec specifications or not, in addition, we didn’t find them on the website. With this in mind, the device seems to be restricted to advanced users; I can’t imagine Joe consumer buying this device and understanding the different encoding techniques needed to make his videos work. Not only that, but Apex doesn’t include any software to help the end-user do so. I myself used Dr. Divx to convert media, but it takes a long time to do so.

Lots to be desired in this category! First off, the device’s record button lags by a few seconds, so you really need to be conscious of when you want to record. When you want to record something you need to wait until the show starts due to the lack of a timer function. Secondly, copy protection built into the recorder won’t even allow you to record your own personal DVD collection. When the recording does work, you have the option of recording in different modes including “Best” which outputs videos at 320×240/2000kbps with 128Kbps audio. The best output seems to be great, no complaints on quality here.

When you enter the music player menu on the device you are presented by a graphical interface which resembles a home audio deck. I myself couldn’t figure out how to play more than one directory of MP3’s at a time, even on the random setting, therefore I dumped everything into one directory and went from there. Pretty standard stuff; support for both MP3, WAV, and WMA formats (without digital rights management). Also, when the MP3’s are playing you can switch the LCD off to conserve battery power.

The device also supports audio recording with nothing special to note.

The picture viewer auto-resizes pictures to fit the player window which you can flip around with the thumb joystick. Again, this feature is pretty standard. It supports TIFF, JPG, BMP, and GIF formats. No RAW format, but that shouldn’t concern many users since this is a very entry-level device.

The device acts like a mass storage device when its plugged into your computer via an USB 2.0 High Speed port. Transfer speeds were around 7 MB/second.

This device lacks major support, it almost seems like the OEM dropped it and has told Apex to live with what you got. I couldn’t see future firmware updates coming out, and if they did it wouldn’t improve the product much. It has no encoding software and useless info on the website are great setbacks. Why Apex acquired this OEM product from MSI is beyond me, who knows, maybe they are still translating the manual into English. If this were $100 less it may be appealing to some users, but at $399, I don’t think I’d take the plunge. The low quality LCD screen also effects the overall impression of this device and with the new Sony PSP out on the street, it’s a tough toss up spending the same amount of money on the E2go.