Siemens Hearing Instruments has developed a new hearing aid called the Acuris Life that uses the first ear-to-ear (e2e) wireless technology. The aid also features an unobtrusive design which fits snugly behind the ear with an in ear LifeTip bud that doesn’t require any prior ear molding. The hearing aid measures a mere 30mm in length and weighs only 2.7grams.

The e2e wireless technology enables the left and right hearing instruments to communicate with each other allowing them to adjust automatically to the wearer’s listening environment. In addition, the user can manually control the volume on one earpiece while the other auto adjusts via the wireless technology. 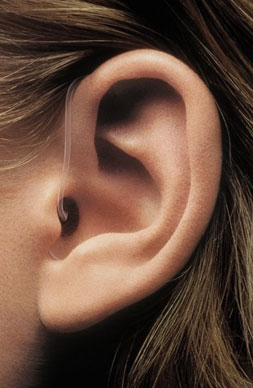 Siemens Hearing Instruments, Inc. – the leading manufacturer of hearing instruments in the United States – today announced the introduction of a state-of-the-art “open” ear hearing instrument which is virtually invisible and was specifically designed to eliminate the “plugged-up” feeling that some wearers experience. ACURIS(TM) Life is a behind-the-ear (BTE) instrument which uses a newly developed tip and tubing and incorporates the recently introduced, cutting-edge, proprietary ear-to-ear (e2e) wireless technology. The new system represents the most technologically advanced, inconspicuous hearing solution for the 392 million people with mild to moderate hearing loss.

e2e wireless technology, pioneered by Siemens and introduced late last year, enables the left and right hearing instruments to communicate with each other and function as one hearing system, thereby creating a level of synchronization never before possible in hearing instruments. ACURIS Life with e2e wireless technology automatically adjusts itself to the wearer’s listening environment, but if desired, synchronized controls allow wearers to adjust the volume or program for both ears with a single adjustment.

ACURIS Life is designed for people who are attracted to a very small, unobtrusive design because it fits discretely behind the ear with excellent cosmetic appeal. The hearing instrument has no visible controls, no ear hook and the instrument’s colors blend with the wearer’s hair or skin tone. In addition, ACURIS Life can be used with the designed tubing or it can be worn with a traditional, customized earmold.

ACURIS Life’s newly developed tip, called LifeTip, is placed in the wearer’s ear canal, as opposed to a traditional earmold, which sits in the ear. ACURIS Life’s open fitting solution does not require any ear impression, so people with hearing loss can be tested and fit in the same visit to their Hearing Care Professional and immediately experience the benefits of the hearing instrument. In addition, High Speed Feedback Cancellation on all ACURIS Life hearing instruments prevents the occurrence of annoying feedback.