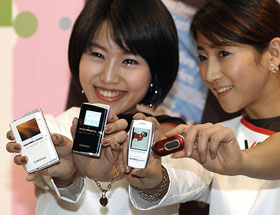 Samsung Electronics has reported that they will ship their new high-capacity multimedia devices in the first half of 2005. The Samsung YP-T8 is a flash-based media player that primarily supports MP3, but has also added support for WMA, Secure WMA, Ogg Vorbis, ASF and oddly enough MPEG4 video. It does have a 1.8-inch, 262K colour TFT LCD screen, which would hardly be adequate for watching a movie on, so I don’t understand why Samsung would offer MPEG4 support in a device with such a small LCD. Battery life is expected in at the 20 hour mark, and it will be available in 256MB to 2GB sizes.

Another of the players is the YH-J70, this is a slightly larger model with 30GB internal storage, same size screen as the YP-T8, same audio and video file support, but this time adding JPEG image support with a built-in photo viewer and mobile gaming with 5 included games. Something the YP-T8 should have regardless. It’s battery life is rated at 25 hours.

The YP-F1 is more aimed to fashionable users (women), it can match a persons outfit in 9 different ways, don’t ask why. It is strictly an audio player and features include an FM-Tuner, Alarm Clock and 3D sound effect. It will be available in 256MB, 512MB and 1GB. Being a small clip-on style player, it only measures 29 x 63 x 17.8mm and weighs 32g.

The YH-J50 is similar in features to the YH-J70, the only difference being the size; 5 or 6GB versions.

All these neat devices were shown at CeBIT in Hanover, Germany earlier this year. Samsung’s new trend in products is basically multi-functional and multimedia, not only for music, but for games, video and viewing photographs. They plan to be the MP3 market leader by 2007.