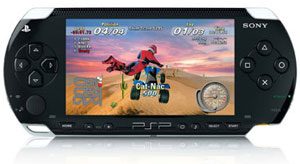 The overly crazed Sony PSP (PlayStation Portable) mobile gaming unit has shipped to retailers today throughout North America. Sony says they have shipped 1 million units for retailers who started selling them as early as midnight, prices range anywhere from $360 to $400 USD, depending on the package. Some of it’s upcoming games include Wipeout Pure, Ape Escape: On the Loose, Gretzky NHL, Metal Gear Acid and Tiger Woods PGA Tour, Sony has a full list on their site.

A great selling feature for the Sony PSP-1001K is it’s versatility; it reads data from either it’s built-in Universal Media Disc drive (UMD) or a Memory Stick Duo slot, which is capable of accessing data of all kinds, whether it be games, movies or music.

There is not much we don’t already know about the PSP, most of this information was announced earlier this year, we know it supports Wi-Fi LAN connectivity for multiplayer gaming and that it is probably sold out by the time you finish reading this story.

Third party applications are rushing to be released, various companies will create new video players, audio applications and maybe one day a VoIP application. If PSP had a built-in video camera or will one day support a video camera module, it could be turned into a portable video messaging device thanks to it’s wireless connectivity and portability.