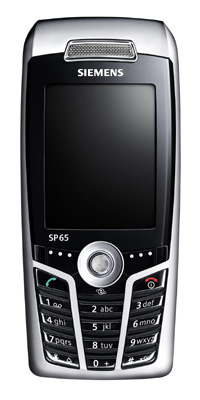 Siemens announced a new high-end business class handset that looks and sounds oddly familiar to the M75 released earlier this month. The SP65 tri-band phone features almost all the specifications that the M75 does except the camera and push-to-talk. Siemens said they removed the camera part of the phone which “supports corporate security policies which prohibit employees to use handsets with cameras”.

Like many business phones, the SP65 will include a wide range of business apps such as Microsoft Outlook, Lotus Notes, and extended PIM (personal information management) software. In order to store all your data, the phone will have a built in MMC card slot. In addition, the phone also features Bluetooth wireless, a large 260,000 color TFT screen, 5 hours of talk time and 250 hours of standby.

No word oh the pricing for the SP65, but we should know before it hits shelves next month.