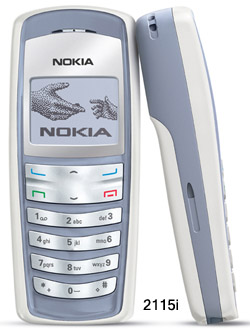 Nokia has released three new CDMA handsets that feature everything from flashlights to cameras. Nothing extremely special to note on these releases; even the 6155 seems void of features compared to what’s on the market, but Nokia does state that the 6155 is in the “upper mid-tier” of their handset range.

The Nokia 2115i is aimed at the entry-level audience which they dubbed the “salary-cap champ” probably due to a low price and basic feature list. The camera will feature a built in flashlight, voice dialing with speakerphone, and a candy bar design. Nothing we haven’t seen before. The handset should hit the stores during the second quarter of 2005.

Next up is the Nokia 3155 clamshell designed phone which is aimed at the middle of the pack. Features include, dual displays, 12 MB built in user memory, MP3 ring tones, FM radio, and a built in voice functionality with speakerphone and voice dialing. You will also be able to synchronize this phone with your PC so you don’t have to re-enter all your PDA data such as appointments and contacts. Expect to see the 3155 on shelves come the third quarter of 2005.

Finally, Nokia tops it all off with their Nokia 6155 clamshell phone which should be seen in the fourth quarter of this year. This handset has a bunch of features, but not too notable considering the impressive releases of phones we saw at CeBIT last week. The 6155 will feature a 1 megapixel camera with 8x digital zoom, LED flash, with video recording and playback at 15 frames per second. Also featured; dual TFT color screens with a 262K main display, voice command functionality, and a bunch of ring tone formats. 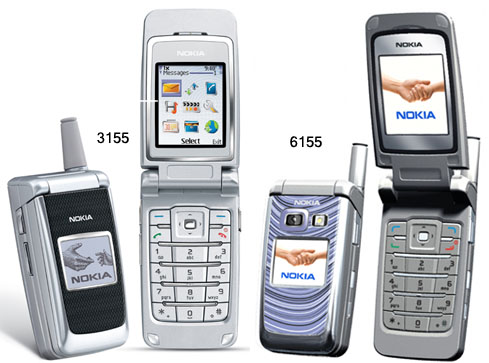