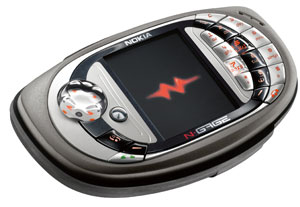 The N-Gage QD portable gaming phone from Nokia keeps getting cheaper and cheaper, but still not as cheap as overseas. Today Nokia announced new North American price points for both the unit and the games. The N-Gage will now retail at $99.99 US prepaid and the games will range from $15-$25 a piece. Back in May of 2004 Nokia announced that they will be selling the unit overseas for around €49.99 ($60 USD).

Nokia says that the new price point will allow retail stores such as Gamestop and Musicland to sell the N-Gage as a prepaid solution.

The new US price is still reasonable; you usually pay around $60-70 for a decent pre-paid phone anyways, so why not get one that can play games and keep you entertained.

A few months ago there were rumors floating around claiming that Nokia was ready to scrap the N-Gage, but they got squashed pretty quick.

Nokia expects pricing in retail stores to hit the $100 price mark in a few days.