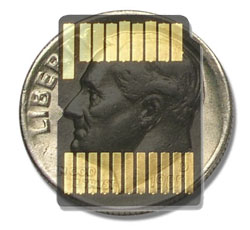 Pretec Electronics today at CeBIT unveiled the newest smallest USB flash drive dubbed C-Flash. The size of C-Flash is 17mm x 12mm x 1.0mm, beating RS-MMC and miniSD by a few. Eventually these things will be so small people will be losing them everywhere, now that’s where implants come.

Built-in smart card support will allow C-Flash to be easily adopted among mobile phone users, which is about the only place safe for these chips considering they are smaller than a dime. C-Flash features multiple interface functions such as MMC/SD and USB, with the widest support of flash IC’s over any chips on the market. 1GB versions will be available as early as June, mobile phones bundled with C-Flash are due later in August.