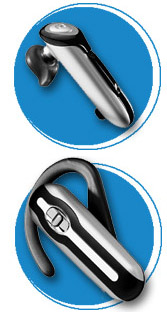 The premium unit codenamed “Tahiti” will feature a AAA battery charger that should keep juicing your batteries for a talk time of around 25 hours. The battery charger can also be connected to your handset via four adapters for most Bluetooth phones enabling you to de-clutter your gadget bag and leave one charger at home. The device weighs less than 9 grams which is about the weight of two nickels.

The Tahiti unit will also include a pen clip carrier that will vibrate when someone is calling you.

The second earpiece, code-named “Tonga” is Plantronic’s new entry-level unit. This version will feature around 9 hours of talk time, not even close to its big brother.

Both ear sets will be available in the fall, pricing not yet announced.