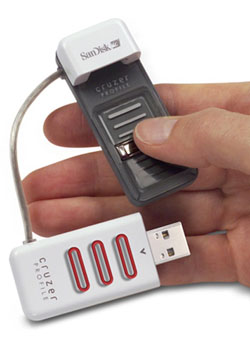 SanDisk stepped up to the plate at CeBIT with a new device that will make every gadget nerd giggle. The SanDisk Cruzer Profile is a USB thumb drive with a built-in fingerprint scanner to keep your data secure.

The drive will come in two different configurations of 512 MB and 1 GB. As for the size, the extra fingerprint module will make it slightly bulkier with measurements of 60mm x 24mm x 14mm. Two LED’s will provide you with all the information you need, one for data transfer and the other to indicate the status of your fingerprint authentication. When carrying the device, the fingerprint scanner proportion of the drive contains the end cap, just snap it on and the device becomes one.

Biometric identification is a feature that has been popping up on may different devices lately, the need to secure data and consumer demand is making it more widely available and affordable. Pantech released a mobile phone with fingerprint identification to keep your personal contacts and mobile data safe. Sony also developed a Memory Stick with the same technology to keep your pictures safe.