Samsung has done it again, they have unveiled the first mobile phone with a built in 7-megapixel camera. You may recall back in October 2004 when they announced their 5-megapixel camera phone.

The SCH-V770 will feature a bag of features for the avid photographer; auto and manual focus, optical zoom, shutter speed control, and exposure control to help boost your creative side. Users can also attach telephoto or wide angle attachments to the camera for maximum usage. Sounds like the camera is feature packed and could prove to be the ultimate all-in-one gadget, but time will tell.

The phone also packs a built in MP3 player and a business card scanner. Samsung has not yet announced pricing for the 7-megapixel wonder, but they said that the phone should hit streets within this first half of 2005. Judging by the pictures, the phone looks a lot more like a digital camera than a phone with its smooth casing and large optical zoom lens. 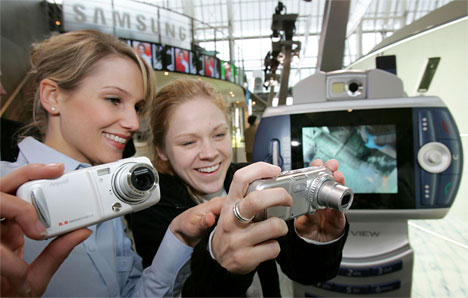 The company will be showing off the phone this week at the CeBiT tradeshow over in Germany when the show starts on Thursday. Expect more pictures and info on the phone when it gets spotted at the show. I would love to see the picture quality coming out of these phones, the sensor in the devices is so small that the pixels must be crammed into the shot.

LG Electronics announced that their 5-megapixel camera phone would hit streets in April with plans for higher megapixel handsets down the line. They also went as far as bashing Samsung for their 5-megapixel phone stating that it lacked many features due to its rush to hit the streets as the first 5MP phone. Lets hope LG steps up to the plate with their releases.