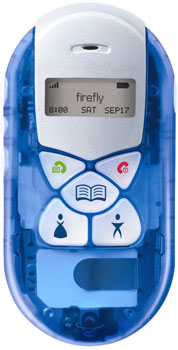 Firefly Mobile has released a cellphone targeted to children aged eight to 12 years old. The $99 cellphone with limited functionality, will be available with pay-as-you-go and pre-paid calling plans. Due out this May direct from Firefly and then later in June from Target stores nationwide.

The “Firefly Phone” will make communications easier between younger children and their close (paranoid) family and relatives. Kids may end up getting these as parental trackers, so mommy can keep tabs on you all the time. It may also serve a great purpose when used in emergency situations; contacting a parent for a ride, how about some lunch money ma?

It’s limited to a five button keypad; power on/off, send/connect, contacts; with 20 number memory (protected by a PIN number) and two mom and dad speed-dial buttons, every day use would be limited to the contacts listed in the secured contact list.

Although having a product which such great communication capability would be a great tool, exposing children to cellular phone activities, specifically from GSM signals, could lead to increased risks of albumin leaking from blood vessels in the brain.

This damage is more likely to occur in younger children when brain development is still taking place, the research summarizes that “Intense use of mobile phones by youngsters is a serious consideration. A neuronal damage of the kind described here may not have immediate, demonstrable consequences, even if repeated. In the long run, however, it may result in reduced brain reserve capacity that might be unveiled by other later neuronal disease or even the wear and tear of aging. We cannot exclude that after some decades of (often) daily use, a whole generation of users may suffer negative effects, perhaps as early as in middle age.”

If your child is using a cell phone in emergency situations and is not using it for many hours at a time, these effects would be minimal or non-existent and would definitely be less of a threat then being left alone in a mall or somewhere lost without means of contact.