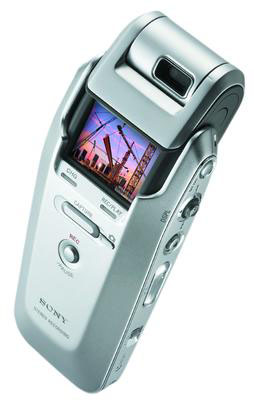 Sony has released seven new digital voice recorders today, most are what you’d expect from a recorder, they record. Except for the ICD-CX50 Visual Voice Recorder, it not only records voice, but it also takes digital pictures which can be viewed and framed on its mini-LCD screen.

The ICD-CX50’s camera is 1.2 megapixels, it can capture close to 4,000 680×480 resolution pictures while storing them on an internal 256MB memory bank. The camera also sports 4x digital zoom to really intimidate your professor. The implications of the device are endless, no more taking notes off endless PowerPoint slides, just snap a picture and laugh at your fellow students.

The ICD-CX50 will come with a rechargeable battery, and is USB 2.0 high-speed file transfer compatible. Sony will ship it to retailers this June for a mammoth $400 USD price tag.

For more information on the other six digital voice recorders you can check out Sony’s press release.