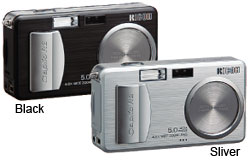 Ricoh has released a new addition to their Caplio line; The Caplio R2. The R2 will feature a 2.5-inch LCD screen in quite a small body measuring 100.2 x 25.8 x 55.0mm. Also featured will be a 5.0 megapixel sensor, 4.8x optical zoom (28-135mm), and a very short shutter lag of 0.06 seconds. When the lens is fully retracted the 28mm equivalent it will help you produce great wide angle pictures. Also for you macro freaks, 1cm macro mode will enable you to get really close to your favorite flowers and bugs.

This camera is oddly familiar to the previous cameras with 2.5-inch displays we have seen lately. More OEM branded stuff? Form your own opinion by checking out the pictures and specification of these; 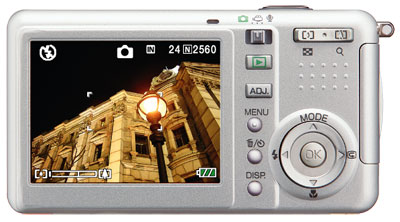 Ricoh Co., Ltd., is proud to announce the release of the new Caplio R2 digital camera—a 5.0 megapixel masterpiece featuring an incredible 4.8x optical zoom lens that guarantees top quality pictures, and an awesome 2.5-inch LCD for super high-resolution images as well as enlarged characters and icons that enhance functionality. The 25.8-mm stylishly thin body of the Caplio R2, a product of Ricoh’s innovative retractive lens system, packs a host of advanced technologies, while the user-friendly interface of the extra-large LCD empowers both professional photographers and photo enthusiasts to take full advantage of all these powerful features. Able to switch between the rechargeable battery and AA batteries, the Caplio R2 is the perfect choice for those on the move.

The Caplio R2’s impressive, high-definition 2.5-inch LCD is considerably larger and provides more image details than any LCD fitted on digital cameras as compact as the Caplio R2. It reduces daytime glare because the LCD is equipped with a convenient one-touch brightness adjustment mechanism that allows clearer confirmation of the image, even in bright sunlight. The extra-large LCD displays enlarged text that is easier to read, and it also expertly arranges an array of helpful icons that do not obscure the image before shooting. Icons representing basic modes and settings, such as shooting mode, flash and macro settings, can be further enlarged to facilitate one-glance checking of current settings. Other useful functions include a histogram that allows confirmation of the image exposure and necessary adjustments before shooting. There is also an ADJ (adjust) button which immediately recalls the most frequently-used exposure, white balance, and ISO settings. For picture playback, there is a choice of displaying one, three, or twelve pictures at a time. A one-picture display includes even the smallest details of a picture, while a twelve-picture display saves time and effort when searching for a desired picture.

Even with a 2.5-inch LCD, the Caplio R2 consumes only as much power as its predecessors fitted with a 1.8-inch LCD, and guarantees long-lasting power with the versatility to switch between three different types of power sources—the lithium ion rechargeable battery, AA alkaline or nickel-hydrogen batteries, or an AC power source. As many as 500* high quality images can be shot on one charge of the rechargeable battery and up to 200** images when using AA alkaline batteries. A combination of these power sources coupled with the Caplio R2’s energy-saving feature, which turns off the LCD monitor when the camera is not in operation, ensures efficient and optimum performance even over an extended period of time.

* Based on CIPA standard (50% flash and zoom usage, LCD on, 30 seconds between shots, reviews of all photos)
**With Matsushita Battery Industrial Co.,Ltd. AA alkaline batteries.

The highly versatile Caplio R2 delivers outstanding results in practically any photographic situation, whether for the capture of wide commanding scenery or the fine details of faraway objects. With a near-panoramic 75-degree angle of view, the Caplio R2’s 28mm wide-angle lens can shoot an incredibly wide spatial area. Since the user doesn’t have to stand back a considerable distance to “squeeze in” all there is—as is necessary with a conventional 35mm digital camera—it is especially useful for shooting wide scenes from a stationary position.
Furthermore, the Caplio R2’s 4.8x optical zoom can hone in on distant objects with startling clarity. A five-step preset zoom function enables zoom from 28mm to 35mm, 50mm, 85mm, and to 135mm quickly with a touch of a button. The 4.8x optical zoom coupled with the 3.6x digital zoom gives an astonishing 17.3x zoom capacity, and Ricoh’s unique Smooth Imaging Engine ensures sharp and vivid images even in large printed formats.

Quick responses are essential to capturing picture-perfect moments. From start-up to shutter response, the Caplio R2 boasts one of the fastest response times of all digital cameras—an incredible 0.8 seconds. When shutter button is pressed (full-press), the shutter responds practically instantaneously in about 0.06 seconds. Calculated from the time the focus is locked (half-press) the shutter responds in a miraculous 0.003 seconds. With the Caplio R2, missed spontaneous moments are a thing of the past. Moreover, the Caplio R2 can be ready to shoot the next picture in less than a second, and its continuous shooting mode captures up to 16 consecutive images with one prolonged press of the shutter button. Utilizing this feature, continuous pictures of a bird taking flight or a toddler’s first unsteady steps are possible, and they can be played back on the extra-large LCD one by one or as a slide show.

Incorporating Ricoh’s unique 1cm macro mode, the Caplio R2 allows the user to exercise imagination and creativity. It can, for example, take a macro shot of a flower petal from a distance of just 1cm, which opens up an exquisite world of intricate details unseen to the naked eye, or with slight adjustment to the perspective create a surrealistic picture out of an ordinary scene. It is even possible to change the point of focus without moving the camera using AF Target Selection to produce an artistic effect. In addition, a special pre-flash illuminates objects in macro mode to allow for clear shots without the whiteout effects often caused by a regular flash. No matter how it is used, the Caplio R2’s macro function adds a whole new dimension to the excitement of digital photography.

More Functions than Meets the Eye

A host of new and improved functions work behind the scenes of the Caplio R2 in support of top class photography. The Caplio R2 adopts a multipoint focus system that divides the image displayed on the LCD into 15 zones and indicates the current focus areas to confirm pre-shooting focus accuracy. In macro mode, an upgraded auto focusing technology measures the closeness, size, and contrast of the macro image to ensure focus precision. When taking pictures in dim indoor light, the Caplio R2 automatically optimizes ISO sensitivity and shutter speed to prevent slow shutter speeds that can lead to blurring from camera shake. Furthermore, the Auto Bracket feature facilitates taking pictures in difficult lightings by automatically shooting three consecutive shots at three different exposure levels. These are only a handful of the Caplio R2’s wealth of outstanding functions.

The Caplio R2 merges with digital printing technology using the PictBridge* interface to enable easy and quick transfer of pictures from the Caplio R2 to a PictBridge printer directly with a USB connector. No PC or driver is needed. For those photo enthusiasts who want to print their pictures right away and share them with friends, this capability is sure to be appreciated. Caplio R2 pictures can also be downloaded to a personal computer, and with the bundled Image Mixer** software they can be edited, compiled into an album, or stored on a photo CD. Sharing and processing pictures has never been this easy nor more fun.