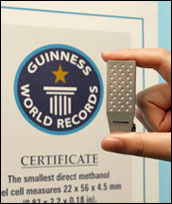 Toshiba, the new world leader in fuel-cell technology, has been recognized today by the Guinness World Records for the world’s smallest Direct Methanol Fuel Cell (DMFC). The Toshiba DMFC is around the size of an average thumb-drive and measures only 22 x 56 x 4.5 mm and 9.1 mm with a fuel tank.

Advances in fuel cell technology have been seemingly slow, we first caught wind of the Toshiba DMFC back in 2003, they are expected to introduce commercial samples of the DMFC to manufacturers of handheld electronic devices on schedule this year. Hitachi also plans to release their DMFC powered PDA this year, but will it be the world’s smallest? Casio’s fuel cell for laptop computers is trailing far behind and may be out in 2007.

The Toshiba DMFC is expected to power an MP3 player for as long as 20 hours on a single 2cc charge of concentrated methanol, this will provide 100 milliwatts of power output. This doesn’t sound all too amazing, but recharging it will only take seconds with a quick shot of power from your methanol canistor.