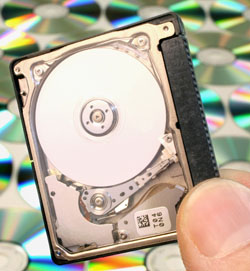 Hitachi must have felt the pressure after Seagate’s announcement of their 6GB MicroDrive retail availability yesterday. They have just announced that they are now shipping their 6GB one-inch MicroDrives with a 40% ($299 USD) price reduction. Hitachi has also stated that they are ramping up production to meet the market demand.

“The Microdrive has always been a hot commodity at a great price due to its reliability and unique position in the market,” said Brian Campbell, president, Pexagon Technology. “But now, with lower price points and more capacity, the Microdrive is an even better value for users of handheld devices and digital cameras.”

I personally use the 4GB version of Hitachi’s MicroDrive which I ripped out of a Creative MuVo2. When I first started using the drive I was skeptical of the reliability due to the old IBM MicroDrives that kept failing on people. Well, its been about 8 months and the drive is still performing great!

Hitachi also reduced the price of their 4GB MicroDrive which now sells for $199 USD, a 60% reduction. Hitachi’s MicroDrive technology has been receiving a lot of press recently. Back in January they announced plans for a 20-percent smaller one-inch hard drive with 8-10 GB of capacity.