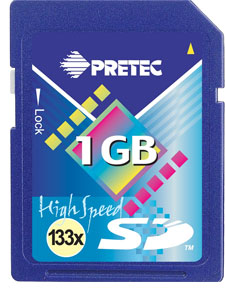 Pretec has unveiled their 133X model secure digital card for high-speed transfers. The 133X card is capable of sustaining 20MB/sec transfer rates for use in high-speed digital cameras and other applications that require speed. Pretec ran tests and found that a full 1GB 133X SD Card full with 5MP high resolution digital images can be transferred in under 60 seconds, more than twice the speed of current high speed SD 60X (9MB/sec).