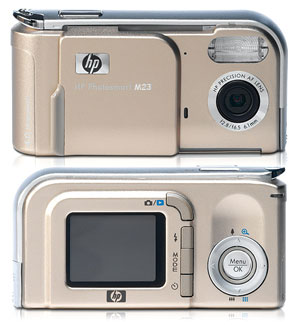 HP has announced their new camera lineup for the PMA 2005 show going on next week. Included in the lineup will be 5 new cameras; The HP Photosmart R717, M417, M22, M23, and the special edition BMW Williams F1 Team camera. The cameras are expected to hit shelves in the spring of 2005 for prices ranging from $149 to $349. Pretty darn good price point if you ask me. Also included in the release are a few new photo printers, although they are not mobile you can check them out on HP’s PMA page.

Now on to the details.

The Photosmart R717 will be HP’s high resolution camera at 6.2 megapixels. Other features include 3x optical zoom, 8x digital zoom, 1.8 inch LCD screen, and a burst rate of 3 frames per second with a buffer of 3 frames.

The Photosmart M417 will also sport a high resolution sensor at 5 megapixels. The camera will also include 3x optical zoom, 7x digital zoom, 2 shot per second burst mode for up to 3 pictures, and a 1.8 inch LCD screen. This camera has a slimmer and smaller design than the R717 perfect for the first time photographer.

The Photosmart M23 starts off HP’s affordable camera line. The M23 will feature a 4 megapixel sensor with 6x digital zoom (no optical zoom), 1.5 inch LCD screen, movie mode, and a slim water resistant metal body with a sliding cover to protect the lens. The camera is estimated to hit streets in spring of 2005 for $169 USD.

The Photosmart M22 is basically the same as the M23 model except with a few scaled down features. It sports the same slim water resistant metal body as the M23, but features 6x digital zoom.

The Photosmart BMW Williams.F1 Team Special Edition will feature the almost the same body as the R717 except its blue! The camera will have scaled down features from the R717; 4.1 megapixel sensor, 3x optical zoom, 7x digital zoom, 1.5 inch LCD screen, and 4 shots burst mode for 5 frames. The camera will also come with a BMW WilliamsF1 Team CD. 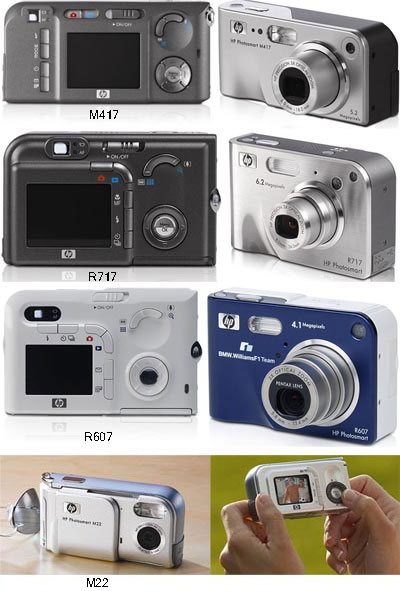