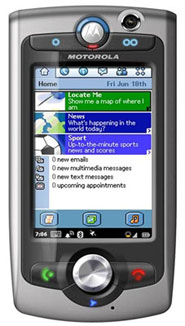 With 3GSM World Congress wrapped up, we are only left drooling over some of the impressive concepts and innovations that took place. Numerous 3G handsets emerged from almost every handset manufacturer that exists, and some that don’t.

Motorola released a hi-resolution 3.0 megapixel imaging phone dubbed the E1120, along with a few additions to their RAZR line-up; the PEBL, SLVR and Black RZR. The quadband Motorola A1010 Smartphone was also an impressive sight, running on Symbian 7.0 OS with a 2.0 megapixel still camera and VGA 2-way video conferencing camera.

The Motorola E1060 MP3 phone with support for 512MB of TransFlash memory, this should be popular among the business/party consumers, it even has a 1.3 megapixel camera with 8x zoom and VGA camera for video conferencing.

Panasonic also came out with a slew of new phones, six clamshell models and two candy bar. Most notably, the PDD Helix concept phone, with features and functionality we dream to see in the coming years.