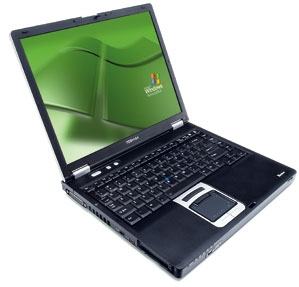 The Tecra M3 notebook series from Toshiba was launched this week. It uses the Intel Centrino Mobile Platform with a super fast 533 MHz front side bus, wireless LAN, 1.6 to 2.13 GHz CPU loaded with 2 MB L2 Cache, enough to power you through any applications or video games currently on the market.

Notebook manufacturers are in constant evolution to create the ultimate mobile desktop system, what they don’t realize (maybe they do, but are just avoiding it) is that battery power will one day have to be addressed. Processors run cooler and draw less power today than they ever did, mostly to compensate for other things like wireless modules and massive processing graphics cards. Toshiba is rating the Tecra M3 at 3.6 hours battery life, so really only 2.5 hours in normal conditions, 3 at best.

What they have done is included a versatile expansion bay that can take on additional hard drives, optical disc drives or another six-cell lithium-ion battery. Even with dual batteries running you may hit 6 hours of run time on a good day, which is not bad, but I’m sure it will weigh close to 10 pounds with them in it.

We see so many notebooks come out each week with faster this, bigger that, but what about the damn battery? Make them smaller, lighter and last longer, then we will be impressed.