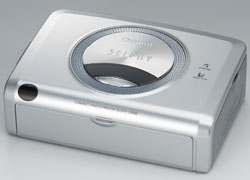 Canon today introduced their new compact, lightweight, portable printer that is powered by either an AC adapter or a rechargeable battery. Weighing in at under 2 pounds, the SELPHY CP600 can connect straight to your PictBridge compatible camera or even connect it up to your computer. The CP600 is an upgrade to the CP330 released last year.

The printer is capable of printing up to 300×300 dpi in 63 seconds for a 4″x6″ image or 73 seconds for the maximum size of 4″ x 8″. You can also connect wireless as well using an IrDA device such as a camera phone using the IrOBEX “vNote”protocol+.

“The Compact Photo Printer SELPHY CP600 is the flagship of Canon’s consumer dye-sub printer line, yet it is the very soul of simplicity when it comes to photo printing,” said Yukiaki Hashimoto, senior vice president and general manager of the consumer imaging group at Canon U.S.A, “Users need only plug the camera into the printer and press the Print/Share button and in barely more than a minute they will be holding a picture in their hand that rivals photo lab results.”

The Compact Photo Printer SELPHY CP600 should hit stores beginning in April for a price of $249.99 USD.