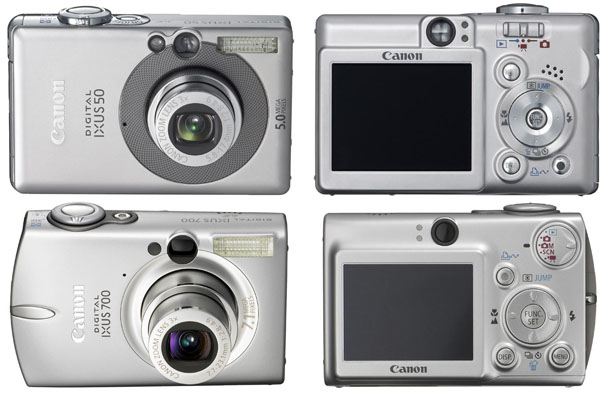 Canon today, with full PRE-PMA spirit, announced their 2 new ultra compact camera models; the Canon PowerShot SD500 and SD400. Both models feature a compact design, 2.0″ LCD viewing screen, and high megapixel resolution. Both cameras will also feature a ‘hold’ function which displays your recently snapped capture for longer and then allows them to be deleted without switching to playback mode.

The SD500 (Digital IXUS 700 in Europe) is being introduced as Canon’s flagship in the IXUS lineup. This 7.1 megapixel camera features a large 2.0″ LCD viewing screen, DIGIC II image processing, zoom feature during movie taking, and its even 8% lighter than its predecessor.

Expect to see this camera in March for a price of around $650 USD.

The SD400 (IXUS 50 in Europe) will feature a 5.0 megapixel sensor, a large 2.0″ LCD viewing screen, 3cm macro mode, DIGIC II processor, and 3x optical zoom. Canon is announcing this camera as their smallest camera yet; 90 x 57 x 27 mm with a weight of 170g. Also featured is an optional underwater casing capable of being submerged in water at up to 40m. It also looks as if they have a carbon fiber ring around the lens housing to save on weight, who knows, at least that’s what it looks like.

Expect to see this camera in March for a price of around $520 USD.

Pre-PMA is always an exciting time; let’s just hope companies keep some secrets hidden for the actual show itself! PMA will be starting on the 20th and running until the 23rd.