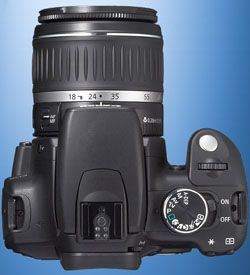 Canon today announced their successor to the 300D Digital Rebel; the Canon 350D Rebel XT. The new camera sports many new features the Canon users have been asking for since the introduction of the digital Rebel back in August of 2003 including a black body. What are you to expect from the new 300D? Higher resolution sensor at 8.2 megapixels, USB 2.0 High-Speed, DIGIC II image processor, Mirror Lock-Up and many more upgrades from the previous model.

Here is a full list of specifications upgraded from the previous model (Digital Rebel 300D).

* For a complete list of specifications visit Canon’s 350D Page.

Still no Matrix metering which the Nikon D70 has, which results in excellent dynamic range in their photos. In fact, the only real new feature that sets the new 350D apart from the D70 is the megapixels, mirror lockup, and USB 2.0 high-speed.

One of the best features of the new camera besides the megapixels is the price! Usually when companies release a new product they jack the price, (see yesterday’s D2Hs release) but not Canon, they are keeping the price low! Just $899 for the body only, no word on the price for the kit but expect it to be around $300 more.

I hope to see another announcement from Nikon very soon regarding upgrades to their every so popular Nikon D70 and D100 lines. Last time, when Canon made the announcement for the 300D Rebel Nikon came back and answered with a far superior camera. Let’s see if that happens again! Yesterday’s announcement regarding the D2Hs was quite a shock and definitely let quite a few Nikon fans down.