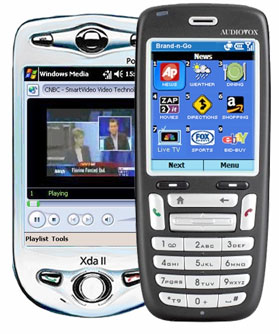 Mobile TV is already popular in Asia and surrounding markets, but due to the lacking infrastructure and device limitations has not yet been widely possible in North America. At the 3GSM World Congress, Action Engine has demonstrated their own live streaming television solution, jointly developed by SmartVideo Technologies; the service is essentially Internet TV that streams video via a Windows Media Server to your Windows Mobile handset.

This technology is very different than what most would expect “Mobile TV” to be, unlike the Toshiba V401T that actually receives TV channels via a built-in analog TV tuner and is not restricted to mobile Internet content providers. The problem goes back to the software, it seems when Windows Media or any type of MS software is used, the end-user is subject to restrictions and limitations of content that are only provided by the assigned content providers, in this case Amazon.com, eBay, FOX Sports, and the Microsoft MapPoint Team.

SmartVideo is working on deals with national programmers like MSNBC and CNBC, ABC News and ABC News Now, The Weather Channel and DIC Entertainment which will open up the spectrum of available viewing, but still won’t offer as great a selection as say a mobile handset with the SH-Mobile3A Application Processor capable of receiving digital broadcasts would.

With manufacturers like Philips launching their own System-in-Package (SiP) solutions with complete digital TV receiver in an area the size of a thumbnail, it may be hard for software based Internet TV applications to stick around. Consumers will be able to connect to live TV, as well as view pictures, movies and music, all on the go. Philips is demonstrating their DVB-H capabilities at the 3GSM World Congress.

A recently conducted survey by Philips found that of the 512 users that took part, 78% stated that they thought TV on mobile was a good idea, with 82% willing to pay for content.