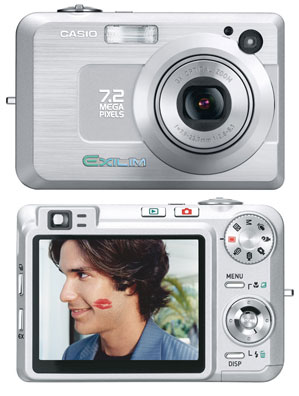 Casio today announced their new Exilim digitals with massive 7.2 megapixel and 5.0 megapixel sensors. The Exilim EX-Z750 is the 7.2 megapixel model, it offers users a 2.5-inch LCD display and 30fps MPEG4 video recording at 640 x 480 resolution. The Exilim EX-Z57 has a 5.0 megapixel sensor, large 2.7-inch LCD and offers a quick response feature; the camera can automatically select a fixed-focus Auto Pan Focus mode for instantaneous response when the shutter is depressed at one push.

Both are capable of 3X optical zoom, expected battery life with the new casio “Super Life” batteries are for around 325 shots with the EX-Z750 and 400 shots with the EX-Z57. They will be available this April for $449 and $399 respectively.

CASIO ELECTROINCS CO., LTD. has announced two exciting additions to its popular EXILIM ZOOM series. The new CASIO EXILIM ZOOM EX-Z750 is equipped with an astonishing 7.2 megapixels and an array of manual features, while the new 5.0 megapixel CASIO EXILIM EX-Z57 boasts an extra large 2.7” display – CASIO’s biggest screen ever! Both models offer extended battery life, making them ideal for use during long vacations, business travel, and other occasions requiring the amazing stamina that these cameras offer.

The EX-Z750’s 7.2 megapixel CCD delivers excellent picture quality with remarkably high definition, while the optical 3 x zoom lens and large 2.5” TFT colour display makes framing and sharing shots a breeze. In addition to standard automatic operation, an extremely versatile array of shooting functions enables users to achieve a variety of photo effects. Using MPEG-4 format, high quality movies can also be taken in VGA size (640 x 480 pixels) at 30 frames per second. CASIO has included its EXILIM Engine to reduce power consumption and its SUPER LIFE battery to enable an impressive 325 shots (CIPA standards) on a single charge. When set in its cradle, an AV out connection allows the user to view and share the photos or movies taken on their television.

The extra-large 2.7” TFT colour display represents an amazingly brilliant picture for framing and viewing without compromising the compact and sleek design. The EX-Z57 features 5 megapixels and a 3x optical zoom lens for capturing photos of remarkable quality. The extra-long battery life of approximately 400 shots (CIPA standards) on a single battery charge assures users that they can enjoy shooting and sharing at their pictures over and over again without ever worrying about running out of power.

CASIO’s camera are now well known worldwide for their advanced miniaturisation and digital technology. The entire range encompasses slim, compact bodies coupled with the latest in digital imaging, making them faster, smaller, and more powerful. CASIO’s unique developments, such as the EXILIM Engine and SUPER LIFE battery technology, along with sleek design put the CASIO EXILIM cameras at the cutting edge of the digital camera world.

Both cameras will be available in the UK from the beginning of April 2005, from all good photographic stores. Recommended retail prices will be confirmed closer to the time of availability.

HIGH QUALITY MOVIE MODE
• MPEG-4 format used at VGA size (640 × 480 pixels), at 30 frames/sec. for high-quality smooth video.
• 3x optical zoom lens, with macro mode allowing shooting down to as close as 10 cm. • Movie BEST SHOT: select a scene* 4 from among the predefined scenarios to achieve the best results
• Approx. 2 hours and 50 minutes of movie shooting on a single battery charge (continuous recording).
• Past Movie function enables video recording to begin from five seconds before the shutter is pressed.
• Short Movie function enables up to eight seconds of movie to be taken during a single shutter release.
• MOTION PRINT function enables either 9 or 1 frames to be converted to a still photo.
• Movie Playback Zoom function enables zoom display during video playback.
• Three types of Movie Editing operation (before, during or after) can be used to eliminate unwanted scenes.

SUPERLIFE BATTERY FOR EXTENDED SHOOTING ON A SINGLE CHARGE:
• Same battery life as the EX-Z55, but with a larger 2.7” LCD
• Approximately 400 shots can be taken on a single battery charge (CIPA standard s ).

QUICK RESPONSE THANKS TO HIGH-SPEED DESIGN:
• Automatic selection of Auto Pan Focus mode for quick response when the shutter is depressed in one push.
• Direct On function for one-touch start up in either picture recording or playback modes.
• High-speed startup enables shooting approximately 1 . 6 seconds* 1 after the power is turned on.
• Shutter release lag time of only 0.01 sec onds means images are recorded approximately 0. 01 seconds after the shutter is released.* 2
• High-speed playback of approx. 0.1sec . interval between images (scroll though 100 images in 10 secs).

FEATURES FOR FUN:
• Voice recording function with playback from the camera’s in-built speaker.
• Photostand feature allowing a slideshow of images while the camera sits in its cradle.
• Calendar function shows thumbnail images of photos taken on any specified date.
• World Time function allows the camera to be set to the local time in one of 162 cities in 32 time zones.
• Store special photos or those you don’t want others to see in your own Favourites folder.
• Create HTML albums in the camera that which can be viewed directly by Web browsers.